What is Pumpkin Seed Oil: Pumpkin belongs to a winter squash class, round, ribbed, with a typically yellowish shell to deep orange in its ripe form. The seeds of the pumpkin are contained in its pulp. Pumpkin seed oil is produced by roasting the seeds and then pressing them to extract the oil.

Aside from culinary uses, the oil is recognized for many health benefits, including diabetes, anxiety, and cancer. Even the World Health Organization recommends pumpkin seeds as a rich, viable source of zinc.  More so, pumpkin seed oil has potent antioxidant properties and abundant vitamins, minerals, and fatty acids.

Is it possible that pumpkin seed oil for hair can produce tangible benefits? Here is what scientists are finding.

At Busan National University in South Korea, a group of researchers studied pumpkin seed oil in men with male pattern baldness [1]. One of their experiment’s general goals was to see if pumpkin oil could provide a safer and more natural alternative to synthetic drugs for hair loss.

Seventy-six male participants, ages 18-65, with moderate degrees of hair loss, participated in this research. They were diagnosed with levels Norwood 2-5.  The subjects were asked to stop taking any drugs or supplements for treating their baldness for three months.

The researchers divided the participants into two groups. One group was given a placebo containing sweet potato starch. Members of the other group were given oral gel capsules containing 400mg of pumpkin seed oil. They were instructed to take two capsules in the morning and two in the evening before their meals.

Does Pumpkin Seed Oil for the Hair Work?

The researchers followed up with the subjects at three months and again at six months to see if hair growth resulted from the pumpkin seed oil treatment protocol. They used three methods of assessing improvements.

2. Measuring the span of the bald regions

The researchers used photolithography technology, which takes photos of the bald areas and provides measurements from the central. This method helps to quantify the areas of hair loss objectively.

3. Visual self-evaluations  by the participants

The participants themselves were asked to rate their hair growth using the visual analog scale (VAS).

Based on the three methods of assessing hair growth changes, the researchers at Busan found that treatment with pumpkin seed oil significantly outperformed the placebo.

The scientists noted the following percentages in the subjects who took the pumpkin seed oil capsules:

The placebo group produced these results:

Researchers performed clinical and dermoscopic evaluations at 1.5 months and the 3-month point. They observed the following parameters in both groups:

The data they collected and their analysis concluded that pumpkin seed oil might offer promise in treating female pattern hair loss.

How Does Pumpkin Seed Oil Help With Hair Issues?

Pumpkin seed oil contains high concentrations of phytosterol beta-sitosterol. This compound can block the 5-alpha-reductase enzyme, preventing testosterone from breaking down into a byproduct called DHT.

Because of their genetics, men with androgenic alopecia are born with hair follicles with sensitive DHT protein receptors. The binding of DHT to these structures will prompt a chain reaction that causes the follicles to miniaturize.

Topical application of pumpkin seed oil was applied on select mice for six days a week, for 3 weeks total.

After 3 weeks of treatment, researchers found significant hair growth in mice given pumpkin seed oil – in some cases, these mice showed more growth than the other group given minoxidil.

Therefore, the researchers concluded that pumpkin seed oil showed promising results as a hair-growth-promoting ingredient and can be used as a natural and effective treatment alternative to synthetic remedies to alopecia such as minoxidil.

Pumpkin Seed Oil And Other Beneficial Ingredients For Your Hair – Dr.UGro Gashee

If you are interested in benefitting from pumpkin seed oil for your hair and scalp, don’t turn to the cooking oil aisle at your local supermarket. Food-grade oil is rather heavy and will leave a greasy residue. Also, these versions of pumpkin seed oil are not sufficient for helping you see a real difference in the quality of your hair.

Instead, it is far better to use this ingredient in the form of a well-formulated combination of natural botanicals backed by research studies. So, where do you find this type of product? Look no further than Dr.UGro Gashee.

Get a product that is truly formulated to serve the intricate needs of your hair follicles. Dr.UGro GASHEE’s oral supplement is made with an astute combination of cold-processed plant-based ingredients. All of them work together to help our pumpkin seed extract do its absolute best for your hair follicles.

Are There Side Effects?

Pumpkin seed oil is generally considered to be safe and edible. Side effects are unknown at this time.

The Environmental Working Group (EWG), which is dedicated to bringing public awareness towards toxic chemicals and substances, assigned a (green) rating of 1 for Pumpkin Seed Oil. This score represents the highest safety, lowest toxic tier on their safety rating scales.

Also, according to the organization, pumpkin seed oil is not regarded as an environmental toxin. Additionally, it is not considered to be potentially toxic or harmful for (nono-reproductive) organs.

Besides its possible use on the scalp for addressing hair loss conditions, Pumpkin seed oil may also be helpful for the following applications

Pumpkin seed oil may also be used in cooking and recipes as a salad dressing, additive in soups, and even an ice-cream sauce alternative, a favorite in Australia.

Meet Jennifer, one of our GASHEE True Life Stories. In her late thirties, she started to notice signs of thinning and hairline recession, particularly after wearing her hair up in a tight bun. She learned about Dr.UGro GASHEE from her mom, who loves our product line. After just nine months of using our oral supplement and hair lotion, she noticed her hairline filling in, as well as the growth of her eyelashes and eyebrows.

Before & After Picture Results: 9 Months of Gashee Oral Capsules

Below is a before and after picture of Jennifer’s results after 9 months of using Gashee natural hair supplement oral capsules. 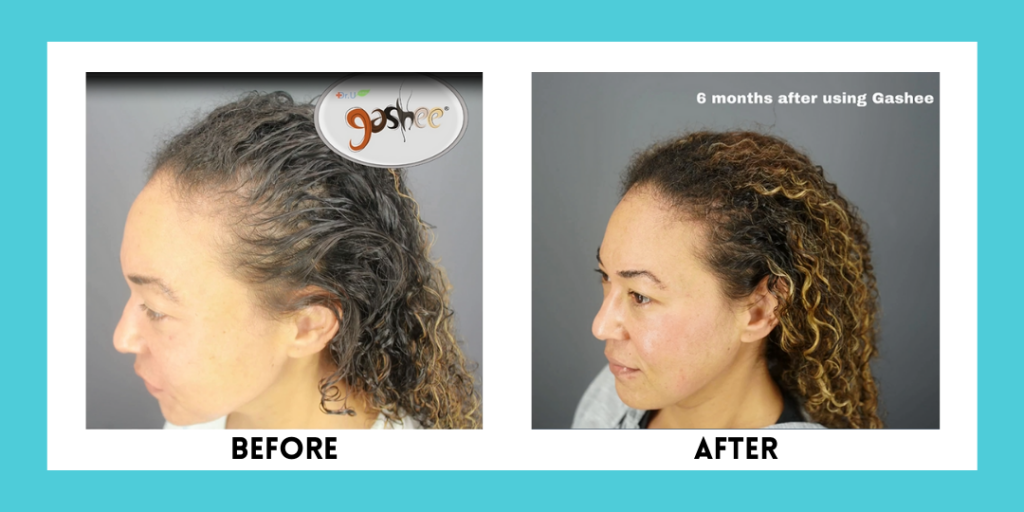 We Are Published! A Multi-Modal Hair Loss Treatment Strategy

Dr.UGro GASHEE’s hair lotion has been published in a medical journal, Case Studies in Dermatological Medicine. Our report, entitled “A Multi-Modal Hair Loss Treatment Strategy,“ details the experiences of five individuals who benefitted from our hair lotion [4]. Four of them had previously used Minoxidil, only to experience failed results. Our uniquely designed plant-based formulation attacks multiple targets that contribute to unhealthy hair follicles, not just one specific mechanism.  The ingredients we selected work in concert with one another to create noticeable and life-changing improvements.

With a profound and more complete understanding of our hair follicles,  we at GASHEE managed to improve real-life people using natural botanical extracts. Even our preservatives were made using plants, not synthetic chemicals.

A possible role for Pumpkin seed oil in hair loss has received some support based on the findings of the Busan University study. However, further research is needed before it can be regarded as an official treatment for baldness. It should be noted that the participants of the pumpkin oil study were diagnosed as Norwood 2 stages up to Norwood 5. Usually, earlier hair loss levels have a more significant potential for experiencing improvements. This is because the follicles have not been completely miniaturized. And it may be possible to restore their hair growth processes.

Additional research is needed to see if pumpkin seed oil may be more effective for milder forms of hair loss than mid-stage cases.

If I wonder how to use pumpkin seed oil, should I consider applying it to my scalp or taking it in capsule form?

If you are interested in taking pumpkin seed oil, you should do so with the intent of improving your general health. Although the Busan study notes positive findings, pumpkin seed oil has yet to be officially considered a bona fide treatment for hair loss.

Applying pumpkin seed oil directly to the scalp is not likely to produce any significant improvements in your hair loss condition without using an enhancer to improve skin penetration. It would be essential to formulate the right balance, which would not be feasible through simple DIY approaches.